Academy faculty are spiritual directors, pastors, professors, authors, and experienced pilgrims and practitioners in the area of spiritual formation, teaching, leading, directing, and guiding in myriad settings around the world. Each Two-Year and Shorter Academy chooses its faculty based on expertise and availability, therefore, we have a rotating faculty list from which we work each year. We are grateful for their leadership and presence with us. 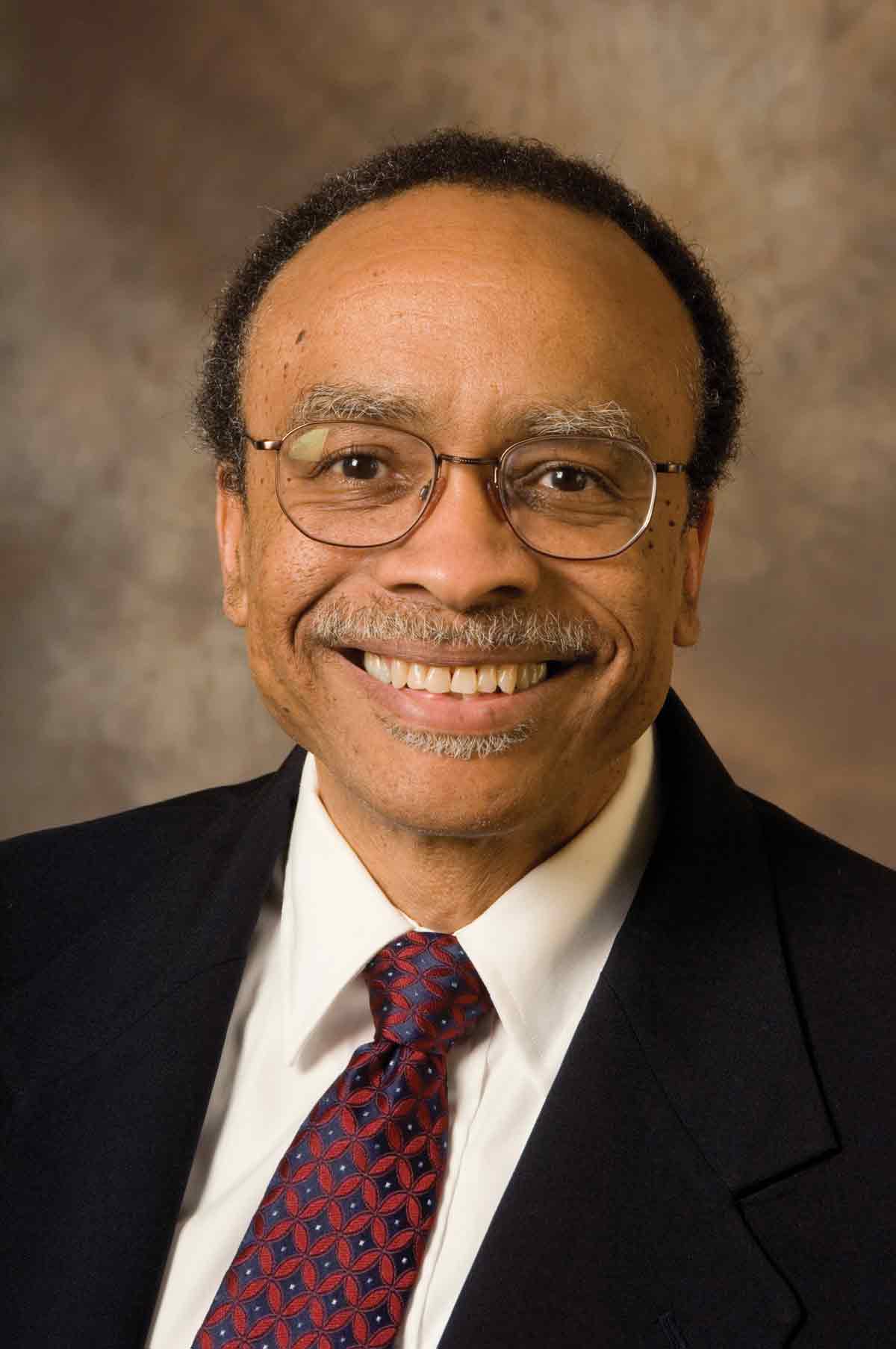 Luther E. Smith, Jr. is professor of Church and Community at the Candler School of Theology of Emory University (Atlanta, Georgia), where he has served on the faculty since 1979. The title of his teaching position reflects his life’s commitment to social transformation as an expression of religious conviction. While at Emory University, Dr. Smith has served as president of the university senate, president of the faculty council, and associate dean for faculty development. Smith holds a Ph. D in American Studies from St. Louis University, a Master of Divinity from Eden Theological Seminary, and a Bachelor of Science in sociology from Washington University (St. Louis, MO). Luther Smith is the author of Howard Thurman: The Mystic as Prophet; Intimacy and Mission; and editor of Howard Thurman: Essential Writings. He serves as senior consulting editor for the Howard Thurman Papers Project. He is active in advocacy for children, persons with intellectual disabilities, and interfaith collaboration. Smith is an ordained minister in the Christian Methodist Episcopal Church. He is married to Helen Pearson Smith and lives in Stone Mountain, Georgia. They have four children and five grandchildren. Wilkie Au, Ph.D., is Professor emeritus of Theological Studies at Loyola Marymount University in Los Angeles, where he taught in the area of Christian spirituality and coordinated the graduate concentration in spiritual direction.  His By Way of the Heart: Toward a Holistic Christian Spirituality won the 1990 Book Award of the College Theology Society and his Enduring Heart: Spirituality for the Long Haul won an award from the Catholic Press Association of the United States and Canada in 2001. With his wife, Dr. Noreen Cannon Au, a Jungian analyst in private practice, he has co-authored Urgings of the Heart: A Spirituality of Integration, The Grateful Heart: Living the Christian Message, and The Discerning Heart: Exploring the Christian Path, which was named best book on pastoral ministry by the Catholic Press Association in 2007. His books have been translated into Spanish, Polish, Chinese, and Korean, and re-published in Great Britain, India, and the Philippines. Barbara Brown Taylor is a New York Times best-selling author, teacher, and Episcopal priest. Her first memoir, Leaving Church (2006), won an Author of the Year award from the Georgia Writers Association. Her last book, Learning to Walk in the Dark (2014), was featured on the cover of TIME magazine. She has served on the faculties of Piedmont College, Columbia Theological Seminary, Candler School of Theology at Emory University, McAfee School of Theology at Mercer University, and the Certificate in Theological Studies program at Arrendale State Prison for Women in Alto, Georgia. In 2014 TIME included her on its annual list of Most Influential People; in 2015 she was named Georgia Woman of the Year; in 2016 she received The President’s Medal at the Chautauqua Institution in New York. She currently serves on the Board of Trustees for Mercer University and is working on her fourteenth book, Holy Envy, coming from HarperOne in April 2019. Her work has been translated into five languages. Author and Speaker on Spiritual Formation

Marjorie J. Thompson, an ordained minister of the Presbyterian Church (USA), is a widely recognized spiritual formation teacher, retreat leader, and writer. Over the past 25 years, Reverend Thompson has served as adjunct faculty for several seminaries, including McCormick, Auburn, Wesley, San Francisco, Columbia, and Vanderbilt. For several years she directed the foundations program for Nashville Stillpoint (programs in spiritual direction and contemplative prayer). For 12 years Marjorie worked on the staff of Upper Room Ministries as director of the Pathways Center for Spiritual Leadership, later called Pathways in Congregational Spirituality. She was chief architect of Companions in Christ, the highly acclaimed line of spiritual formation resources for small groups. Marjorie authored chapters for several volumes in the Companions in Christ series, including The Way of Forgiveness, The Way of Blessedness, and Exploring the Way, as well as many of the Leaders Guides in this series. Marjorie received a B.A. in religious studies from Swarthmore College and an M. Div. from McCormick Seminary, where she focused on church history and ecumenical studies. She was a research fellow at Yale Divinity School, where she studied Christian spirituality with Henri Nouwen and did independent research in ecumenical traditions of prayer.   In addition to her extensive writing for the Companions in Christ series, Marjorie is the author of Family, the Forming Center (Upper Room Books) and Soul Feast: An Invitation to the Christian Spiritual (Westminster John Knox Press). Her writings have also appeared in several books and journals, including Weavings: A Journal of the Christian Spiritual Life. Recently she contributed a chapter to A Spiritual Life: Perspectives from Poets, Prophets, and Preachers (Westminster John Knox Press), where she writes of her own spiritual practice. Dr. M. Thomas Thangaraj is the D. W. and Ruth Brooks Associate Professor of World Christianity Emeritus at the Candler School of Theology, Emory University, Atlanta, Georgia. Before joining the Emory faculty, Thangaraj taught at the Tamilnadu Theological Seminary in Madurai, India (1971-1988) and serves as a minister in the Church of South India in the Tirunelveli area. Thangaraj was educated at St. Johns College, Palayamkottai; Madras Christian College, Madras; Serampore College, Serampore, W. Bengal; United Theological College, Bangalore at the graduate and postgraduate levels. He earned his Doctor of Theology degree from Harvard University, U. S. A. His area of research during his doctoral studies was in the area of relation between Saiva Siddhanta (South Indian Hindu philosophical tradition) and Christianity, especially around the concept of guru. Thangaraj is the author of The Common Task: A Theology of Christian Mission, Relating to People of Other Religions: What Every Christian Needs to Know, and The Crucified Guru: An Experiment in Cross-Cultural Christology. He has served and continues to serve as a faculty person for both two-year and 5-Day Academy for Spiritual Formation addressing the topic of Christian Spirituality in a Global Context. Apart from his academic interests, Professor Thangaraj is keenly interested in South Indian music, both classical and popular, and also in the art of hymnody in Tamil. Twenty of his hymns appear in the official hymnbook of the churches in Tamilnadu. A few of his hymns in English are published in the United States, Sweden, Germany, and Denmark. Born and raised in the borderlands between Mexico and the United States Dr. Leticia Guardiola – Saenz uses her bicultural experience as one of her critical lenses for reading the New Testament. Her main academic and teaching interests are biblical spirituality, contextual readings of the Gospels, and cultural representations of Jesus as models for ministerial work.

She is the author of several publications that have appeared in various books and magazines. Recently co-edited the book The Peoples ‘ Companion to the Bible and is currently working on a feminist – cultural interpretation of The Letters of John, for the Wisdom Bible Commentary series. She has been active in ministry both in Mexico and the U.S., leading and teaching Bible courses and workshops within several ecclesial communities, such as the United Methodist Church in New Jersey and Tennessee; the Archdiocese of Seattle, Los Angeles, and Kalamazoo; the Episcopal Church in New York; the Lutheran Church in Texas; the Presbyterian Church in Florida and Texas; the Nazarene Church in California; and the Baptist Church in Mexico, Illinois and Seattle. She earned her Ph.D. in New Testament from Vanderbilt University in Nashville, TN. She currently teaches at the School of Theology and Ministry at Seattle University (2008), and previously taught at Drew University in New Jersey and Andover Newton Theological School in Massachusetts.

"The Academy for Spiritual Formation is the finest and most comprehensive, ecumenical non-degree program in spiritual formation in this country."

"The Academy experience is one of sacred time and sacred space with a sacred process of coming to self, others, and God."

"The Academy is a beautiful example of the reconfiguring of Protestantism. It's the kind of thing I would hope to see happening more."

Phyllis Tickle, Founding editor of the Religion Department of Publishers Weekly and a leading authority on religion in America.

"The Academy gets to the heart of the church."

"The Academy has been a gift of time and space to learn how to be sustainable in ministry. There I could drink deeply from the well and be filled and discover once again that God's grace is sufficient."

"Jesus saved my life, but The Academy saved my ministry."

"The Academy for Spiritual Formation gave me the space, the time, the support, and the model I needed to learn again that God loves me deeply. This is my true story, and The Academy helped me discover it."

"The Academy provides one of the most holistic programs of spiritual nurture available today."

Robert Mulholland, Seminary professor and author of Shaped by the Word

"The Academy offers a structured, supportive community in which Christians can learn Christian history as a resource for their own spiritual growth in the love of God and neighbor, take risks spiritually, and find the courage to submit to God for healing the very parts of themselves they most reject. I am committed to support it."

Roberta Bondi, Seminary faculty and author of To Love as God Loves and Wild Things